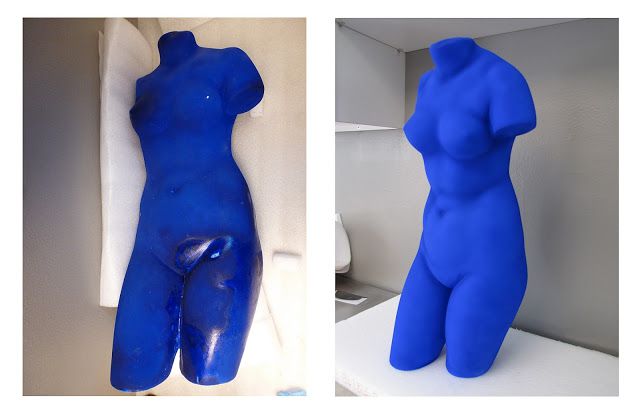 The majestic deep shade and brilliance of the ultramarine blue pigment has conquered the heart of artists and viewers of the Western world since the medieval illuminated manuscripts from c.1100. ‪Natural Ultramarinus (lapis lazuli), which literally means: "beyond the sea” was imported from Asia, more specific from the quarries of Badakhshan, northeastern Afghanistan. According to Marco Polo’s description, the finest blue azuri “…appears in veins like silver streaks”. Due to its vibrant shade, unmatched by any other blue, the pigment was more valuable than gold during the 13th century and beyond. Renaissance artists such as Giotto and Cimabue reserved the precious stone pigment for the Virgin Mary’s mantel or the heavenly blue sky. A painting with ultramarine was a symbol of high status and imparted prestige to the rich art commissioners.

Synthetic ultramarine pigment was developed by different chemists between the late 1700's and early 1800's. The vibrant blue hue also captured the interest of modern and cotemporary artists, but no one revived the spirit of the mineral as Yves Klein did with his IKB (International Klein Blue). The French controversial artist, a “master of blue”, as he was sometimes referred, mesmerized the world with his intriguing monochrome paintings and three-dimensional works of art. In the search of a dazzling blue, and frustrated by the dullness that the natural binders conveyed to the pigment, Yves Klein sought the help of his friend, Edouard Adam. Together they found a chemist that was able to combine a polyvinyl acetate resin, called Rhodopas M, used for waterproofing maps, with the blue pigment. The resin allows the powdered pigment to retain its brilliance, its granular look and matt depths. Under the name International Klein Blue the pigment was patented in the 1960’s.

Yves Klein’s pristine monochrome surfaces are very difficult to preserve. The original resin is not only fragile but, just like any opaque paint, the binder does little to protect the pigment close to its surface. The paint’s matt granular finish is extremely easy to smudge or abrade. In addition, they tend to trap air-born particles such as dust, which is very difficult to remove, even with a soft Japanese brush. Please follow my advice and do not attempt such endeavor. It is better to leave it on the hands of a professional.

As a conservator, I worked on several Yves Kleins; all Venus Blue. Even though the three dimensional torso is a plaster cast and came from the same mold, they show slight differences. The preservation of these pieces present a challenge to any conservator. In terms of restoring the color, nowadays, vinyl-based copolymers, mixed with pigments, are being used to replace the original toxic Rhodopas M. In addition, I found out that cellulose ethers are a good alternative to replace the resin in the case of an already treated piece.

My best advice to preserve Yves Klein pieces is to keep them under glazing, such as plexiglass UV-treated box. A climate control vitrine or frame can keep the artwork free from occasional abrasion and dust. But remember, this display cases are not 100% sealed. And never place Klein’s pieces close to a window or an air conditioning outlet, and always keep them far away from pollutants that may be coming from the kitchen. Also, keep in mind that you should never pick up Klein's pieces with your bare hands or even with cotton gloves. Nitrile gloves are much better.